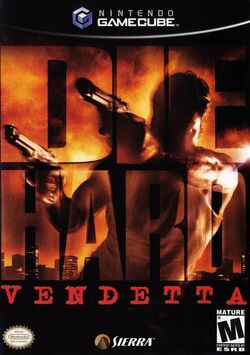 Die Hard: Vendetta is a first person shooter video game published by Sierra Entertainment. The game was released for the Nintendo GameCube on November 19th, 2002 in North America and Europe. It was ported to the PlayStation 2 and Xbox in Europe in 2003. Reginald VelJohnson reprises his role as Sgt. Al Powell and it features Nakatomi Plaza in one of its levels.

The game takes place five years after the events Die Hard with a Vengeance in Los Angeles. After a short time on the Los Angeles Police Department, John McClane's daughter Lucy is kidnapped by Piet Gruber, the son of Hans Gruber and nephew of Simon Gruber.

This game's entire storyline has been considered non-canon since the release of Live Free or Die Hard, which contradicts many of the game's plot elements.

Retrieved from "https://diehard.fandom.com/wiki/Die_Hard:_Vendetta?oldid=24534"
Community content is available under CC-BY-SA unless otherwise noted.