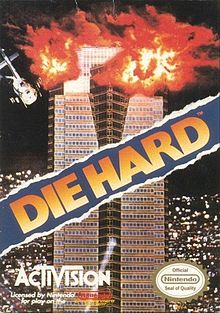 Die Hard was a video game based on the original Die Hard film. It was released in 1990 (the same year that the Die Hard 2 movie was released) for the NES, Commdore 64, and MS-DOS platforms. In the game the player rescues hostages and battles with terrorists from a top view perspective at Nakatomi Plaza in Los Angeles.

There are 40 'crooks' in the game and they are separated by color. Most of the main enemies (all named after terrorists in the movie) wear blue and always carry an MP5 submachine gun, a spare clip and a CB radio. There are also green terrorist that often carry a spare clip or a soda. The only two terrorists that don't fall into these categories are Hans Gruber and Karl. Karl wears white and will hunt down John McClane towards the end of the game to retrieve the detonators. Hans is the last enemy you fight and is found on the 30th floor with Holly hostage. The objective of the game is to kill every terrorist before they break into the Nakatomi vault.

The game follows the movie quite well. When starting the game on the normal setting, the player begins on the 32nd floor where two terrorist are already there, one of which is Tony. If the player manages to take a CB radio from one of the blue terrorists they can go to the roof and contact the police. When the police finally arrive, Al Powell will begin assisting you at hunting down the remaining terrorists. There's also a scripted moment taken right from the film where the terrorists fire a rocket launcher directly at the SWAT team's armored vehicle. Other scripted moments include jumping off the roof of the Nakatomi building just before it explodes. This will only happen if the terrorists have the detonators after the vault opens. McClane will then swing right into the 30th floor.

The player is free to roam around the six main floors near the top of the building. There's the 31st Floor which is where the player can find the detonators after killing Heinrich. The 33rd floor, like in the movie, is filled with computers and glass dividers. The 34th floor is the 31st floor in the movie, with the same miniature models and zigzag table. The 35th floor is the floor just below the roof and like the movie is coated with C4 explosives. If the player detonates any explosives on this floor the whole room explodes, killing McClane. Climbing the stairway from the 35th floor takes you to the roof where as mentioned above, you can contact the police.

Getting to different floors can be accomplished by the stairways, the elevators and the air duct. Terrorist will often come out of the elevators during scripted moments or simply if the player is on a certain floor for some time. If the player stays in the air ducts for too long, Hans will alert the nearby terrorists to your location and begin firing at the air ducts. The stairways however are the only location that terrorists are unable to get into. There are also two other rooms that you can get to less freely. If the player works quick they can find a way to the 4th floor through an optional elevator once McClane takes control of the computer. Here, McClane can blow up the main computer using a rocket launcher to increase the amount of time it will take for the vault to open. The final room is the 30th floor which the player can only get to once the vault has opened. Here the player will fight the remaining terrorists and finally Hans.

The player begins the game with only a Beretta pistol and 15 rounds of ammo, just like McClane does in the movie. After killing some terrorists, the player is able to commandeer their MP5 submachine guns which makes confrontations with the terrorists a lot easier. Once the player picks up a CB radio, they can listen in to the terrorists as well as contact the police on the roof. Once the police arrive, Al will contact you through the radio to help with hunting down the terrorists. Flash grenades can also be found and used to stun enemies. For health, the player can find soda cans either from a slain enemy, a vending machine or just placed somewhere on the floor. The player can also find C4 explosives in many rooms in the game. At a certain point in the game, Hans will send Heinrich down to the 31st floor. If the player kills Heinrich, they can then use the detonators to blow up blocks of C4 on certain locked doors.

The game also comes with many alternate endings that the player can get if they complete the game in a certain way:

Retrieved from "https://diehard.fandom.com/wiki/Die_Hard_(video_game)?oldid=24525"
Community content is available under CC-BY-SA unless otherwise noted.