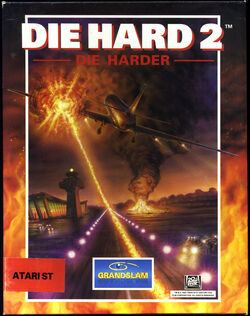 Die Hard 2: Die Harder was a video game based on the second Die Hard film. It was released in 1992 (two years after the movie was released) for the Commodore 64, PC, Atari ST, and Amiga platforms. In the game the player fights against an army of terrorists holding an airport hostage.

Battle on the aircraft's wing.
Add a photo to this gallery

Retrieved from "https://diehard.fandom.com/wiki/Die_Hard_2:_Die_Harder_(video_game)?oldid=24529"
Community content is available under CC-BY-SA unless otherwise noted.