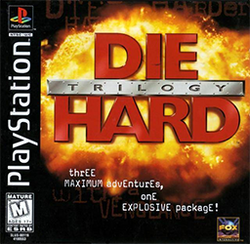 Die Hard Trilogy is a video game based on the first three Die Hard movies (Die Hard, Die Hard 2, and Die Hard with a Vengeance). Die Hard Trilogy features three games in one, each based on the movie installment and featuring a different genre and game play style respectively as you control John McClane in each chapter of the game. It was released in North America in PlayStation (PS1), Microsoft Windows and Sega Saturn on August 20, 1996 by Fox Interactive.

Die Hard is a third-person shooter. The player controls McClane as he battles terrorist and rescue hostages in the Nakatomi Plaza at each floor, which starts from the garage floor and up. Bonus stages take the player to the roof to protect hostages as they escape to the rescue helicopter. If McClane is killed or failed to reach the elevator, the game over scene shows the Nakatomi Plaza being blown up.

Die Hard 2: Die Harder is presented as an on-rails first-person shooter, as a player controls the crosshairs to battle terrorists who had taken over Dulles International Airport. Alternatively, the player can use a light gun (the Sega Stunner for the Saturn Version, while the PlayStation version can use any light gun that doesn't use the GunCon technology which is normally used for games like Time Crisis and Point Blank). If McClane loss all of his lives, the game over shows the plane carrying Holly McClane and Richard Thornburg crashes into the ground and explodes killing them.

Die Hard with a Vengeance is a driving-mode game which McClane, with Zeus Carver in tow, drives any vehicle, such as a taxi cab, dump truck and sports car, to drive throughout New York City and is tasked of finding and defusing explosives before they go off. If McClane and Zeus failed to defuse the explosive, the game over shows New York City being blown up.

John McClane: A New York City cop who always seems to wind up in the wrong place at the wrong time. He is the only person who is not captured during the taking of the Nakatomi tower. Two years later, he uncovers a terrorist plot at Dulles International Airport. He finally found himself having to battle a bomber in New York City. In spite of the odds, McClane comes out on top every time. Being a video game, John McClane's characteristics in 'Die Hard Trilogy' are limited to him constantly spouting one-liners and apologizing when accidently killing a civilian.

Zeus Carver: A New York salesman who ends up accidentally embroiled in McClane's mission against the New York bomber. He will assist McClane during the 'With a Vengeance' game by giving directions on which root to take while driving.

Simon Gruber: The antagonistic bomber of New York. He planted the bombs and threatened to detonate them in order to distract from his robbery of the US Federal Reserve. When he was finally confronted by McClane and Carver, he attempted to escape in his helicopter, but due to McClane's interference, he crashed and died in the explosion.

Colonel Stuart: While not seen anywhere in the game, his voice can be heard during the level where he and some other terrorist through grenades into the cockpit that McClane is in. His only line is: "Consider this, a military funeral."

General Esperanza: Like Stuart, he doesn't appear anywhere in the game but he can be heard on McClane's radio during the tunnel level where he is describing his descent to the airport to Colonel Stuart.

Nakatomi terrorists: A gang of ruthless German thugs who took over the Nakatomi building in LA and took hostages, but were defeated by McClane. Some terrorists later in the game, disguise themselves as hostages so that when McClane rescues them, they'll begin firing upon him.

Dulles Airport terrorists: A group of heavily armed men who took control of Dulles International Airport. They attempted to escape on a stolen plane but, but McClane shot them down. The enemies from the 'Die Hard' game were reused for the 'Die Hard 2' game so their sound bites make them out to be Germans.

Nakatomi hostages: The innocent people who work in the Nakatomi tower who were taken hostage by the terrorists. Many of them were saved by John McClane.

Dulles Airport hostages: The innocent people who were present at Dulles International Airport when it was taken over. Many of them were saved by John McClane.

New York pedestrians: The innocent civilians of NYC who were endangered by Simon's bomb plot. Many of them were saved by John McClane and Zeus Carver.

The game was well-received and widely successful.

Retrieved from "https://diehard.fandom.com/wiki/Die_Hard_Trilogy?oldid=24531"
Community content is available under CC-BY-SA unless otherwise noted.