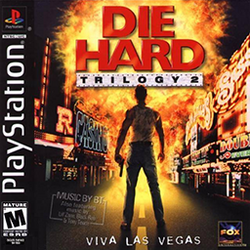 Die Hard Trilogy 2: Viva Las Vegas is a video game sequel to the successful Die Hard Trilogy game, which was based of the first three of the Die Hard series. It was released in PlayStation 1 (PS1) and Microsoft Windows on February 29, 2000 by Fox Interactive.

Like it's predecessor, it has three distinct genres, third-person shooter, a light-gun game and an action-driving game. However, unlike Die Hard Trilogy, which featured three separate storylines based on the first three Die Hard films, Die Hard Trilogy 2 features a single original storyline that alternates between the three genres throughout the levels.

John McClane is living in his apartment in New York when he receives a call from his best friend from the New York Police Department days, Kenny Sinclair and invites him to Las Vegas. Kenny has been appointed as a new warden of the Mesa Grande Prison outside of Vegas and is throwing a party in his honor. McClane accepts the invitation since he has nothing better to do. During the party, McClane has a brief conversation about a prisoner, a terrorist name Klaus Von Haug and meets Reese Hoffman, the owner of the new Roaring's 20 Casino, and his secretary, Elena Goshkin. During the party, however, a prison riot occurs and Von Haug escapes from his prison cell. So McClane battles the terrorist thugs again in the true Die Hard form.

Along the way, McClane discovers a terrorist plot in an attempt to control Las Vegas and must stop the plot before it's too late.

The gameplay consists of three modes in various levels; a third-person shooter, a light gun game, and an action driving game, just like it's predecessor. But it features a single original storyline that alternates between the three genres throughout the levels. 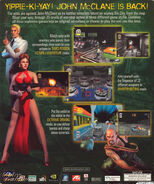