The Federal Bureau of Investigation (or the FBI for short) is the official governmental agency of the United States, formed in 1935. They appear in nearly every film in the Die Hard film series except for two orb them. The FBI usually send in their best agents to tell John McClane what they are dealing with.

The FBI's Special Agent Johnson and Agent Johnson arrive on the scene of the Nakatomi Heist and immediately take over the situation from LAPD Deputy Chief Dwayne T. Robinson. Al Powell tells them the reason they are here dealing with less terrorists than before is because of McClane. While McClane is fighting off terrorists within the building, the FBI agents cause further ruckus than what was previously caused by Robinson. Special Agent Johnson even sternly orders an electrician to shut off Nakatomi's power or he will lose his job. The Johnsons share a laugh, saying it's gonna piss the mayor's pants when he hears about this. He later talks to Hans Gruber and tells him he has the helicopter ready to escort him to the airport. Both FBI Agents get on the helicopter and fly to the roof of Nakatomi Plaza. They see the hostages on the roof being scared by a terrorist, unknown to them that it is actually John McClane, scaring them away with a gun from the roof before Hans can kill them all. Special Agent Johnson fires at McClane, injuring him as he tries to run away. He readies his gun to shoot at him again, but Hans blows up the roof, destroying the helicopter and killing the agents inside. McClane, however, survived via a fire hose and barely made it back into the building.

Absent from the second film, the FBI returns in Die Hard with a Vengeance. Agent Andy Cross is seen arriving in a limousine along with the FBI Chief and Bill Jarvis (from another agency). After the Wall Street Station explosion, Cross talks with Inspector Walter Cobb and John McClane from the NYPD about what they are dealing with in Manhattan (Zeus Carver is also present). Cross questions McClane but Cobb doesn't want him getting into any hype about this. Agent Cross then says he wants to know what McClane knows from what has been happening in Manhattan. When the chief asks McClane if the name 'Gruber' means anything to him, it gives him a flashback of when he dropped the late Hans Gruber 30 stories below to his death. He tells McClane that Hans is Simon Gruber's brother. Later, they receive a call from Simon. He warns Cross, McClane and the others that he planted 2,400 pounds of explosives in one of the Manhattan schools and will be detonated if using radio communication. Cross then says he has two kids in one of those schools and that it will take him forever to send in more agents to get there. When the fleet of NYPD cars leave Wall Street, so do McClane and Zeus, and the FBI agents are not heard from again after that.

In their most latest appearance in the Die Hard series, the FBI play a larger role in Live Free or Die Hard. During a Fire Sale breakout, the FBI Cyber Security unit system is hacked by a group of cyber terrorists, killing every suspect hacker out there to remove any loose ends. Just when they were about to have another hacker killed, the hacker who goes by the name of Matt Farrell, is unconvincingly saved by NYPD detective John McClane. McClane is assigned to bring Farrell to FBI Deputy Director Miguel Bowman. McClane and Bowman have a talk about the terrorist situation in Washington, D.C. when Farrell brings up the subject this may be a Fire Sale, Bowman stating "We don't know that." Worse things start to turn up when a threatening message is delivered to the United States via a compilation of presidential speeches. Bowman, his assistant director Molina, Taylor, and Raj start a procedure to track down who is responsible for the Fire Sale while FBI Agent Johnson met up with McClane and Farrell and puts them in his car to take them to DHS headquarters. However they were not alone, as a helicopter was following the vehicle Johnson was driving. He was shot dead by Del before he can respond to the situation, including agents Alderson and Laughlin who were following them. Much later, McClane and Farrell watch another TV news broadcast showing the United States Capitol Building "being imploded"; Bowman also witnesses this and only speaks briefly with McClane on his cellphone before the power sources of all cellphones in the United States are disabled by the terrorists. Meanwhile at Eastern Power Hub in West Virginia, McClane sends Bowman a photo taken of a man identified as Thomas Gabriel, the mastermind behind the Fire Sale. The following day after Independence Day, McClane interrogates and kills Gabriel and his henchmen at the warehouse that was used as his hideout and rescues his daughter Lucy McClane and Farrell. The FBI arrive soon after and treat McClane's injuries. Although Farrell was suspected as a terrorist by the FBI, Bowman clears his name. 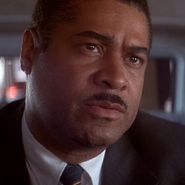 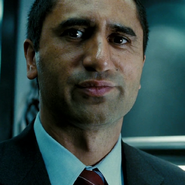 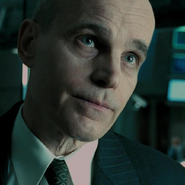 Laughlin
Add a photo to this gallery
Retrieved from "https://diehard.fandom.com/wiki/Federal_Bureau_of_Investigation?oldid=22472"
Community content is available under CC-BY-SA unless otherwise noted.