Die Hard Wiki
Register
Don't have an account?
Sign In
Advertisement
in: Characters, Antagonists, A Good Day to Die Hard characters,
and 9 more

"This is for you, papa!"
―Irina preparing to kill John and Jack McClane before her death.

Irina Komarova was the daughter of Yuri Komarov and the secondary antagonist of A Good Day to Die Hard. She worked for Viktor Chagarin's enforcer Alik, in order to get close to Chagarin's group, which she became the henchwoman of. Although it appeared that she had betrayed her father, she was secretly working with him and tricking Alik and Chagarin to allow her father to gain access to the abandoned uranium canisters in Chernobyl's nuclear reactor.

A Good Day to Die Hard[]

Irina is first seen when she pulls into a parking garage in Moscow on a motorcycle. She changes out of a leather jumpsuit into a contemporary dress, and met up with Chagarin. She was present with Alik when he bombs the courthouse in an attempt to capture her father, Yuri Komarov. As they didn't find her father in the courthouse, she kills one of the Russian soldiers in the room with her pistol. Then she and Alik split up to get to her father.

Afterwards, her father calls her and tells her to meet her on the floor of Hotel Ukraina where he and her deceased mother had their first date. Komarov arrives with John McClane and his son, Jack, who are guarding Komarov from assassins. Upon talking to Irina, who is nervous and can barely speak English, John grows suspicious of Irina about her since Moscow is known to have heavy traffic and she arrived sooner than before. His suspicions are proven correct when Alik and his men crash in and tie John and Jack up. Surprisingly, Irina pulls a Beretta Px4 Storm subcompact pistol and holds it to her own father's head, claiming that she is betraying him for the "millions of dollars" to be gained. John and Jack escape after a firefight and Irina takes her father away with Alik and the other henchmen working for Chagarin.

Irina and Komarov are flown to the ruins of neighboring Chernobyl, Ukraine, site of a nuclear meltdown at a nuclear power plant. They go into the abandoned main warehouse, which is supposedly the location of a file containing information on Chagarin that he doesn't want to leak. After Irina determines that the vault is not irradiated and therefore safe to enter, Alik discovers that the vault is only filled with armored cases of leftover enriched power plant uranium rods. Angered, Alik demands to know where the file is, only to be shot to death by Komarov, who at this point, is revealed as the main villain.

Komarov and Irina embrace, and he tells his daughter that he told her the plan would work, meaning that the two were never at odds and were secretly working together so they could fool Chagarin's men and gain access to millions of Euros worth of forgotten weapons-grade uranium to be sold to nuclear terrorists. He tells his daughter to get every uranium loaded up. When she checks in with one of the patrol group who has not responded, she knew something was wrong and went in to check on her father.

At this point, John and Jack discover Komarov's true plot, but Irina, with another henchman, comes to her father's aid. John goes after Irina, who is escaping on a Mil Mi-26 helicopter. Irina tries to protect her father by firing the helicopter's cannons at Jack, but John is able to sneak on board and drive a truck still shackled to the chopper by a chain, out of the open rear ramp of the helicopter, yanking the helicopter down. Komarov remarks that Jack will get to watch his father die, and an enraged Jack hurls him off the rooftop, where Komarov falls into the spinning helicopter's rotors and is killed as John escapes the helicopter and runs into the building after his son. Blind with rage and wanting to avenge her dead father, Irina rams the helicopter into the building, wanting to kill John and Jack in a suicide attack, but this fails. After Irina sees Jack and John escape the destroyed building, she tries to pull out of the wreckage, but the helicopter loses control and plummets sideways onto the ground, causing it to explode and killing Irina, Vadim and the helicopter co-pilot. This makes her, the co-pilot and Vadim the last terrorists killed in the operation. 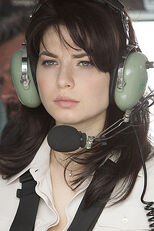 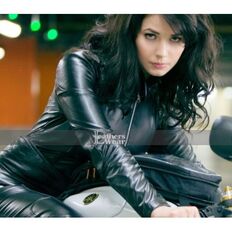 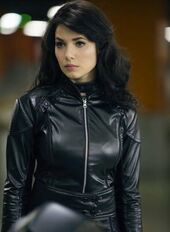 Irina wearing her Leather Jumpsuit in the parking

Yuliya Snigir portrayed Irina Komarova in A Good Day to Die Hard. Though the plot is set in Russia, Snigir and Sergei Kolesnikov (Chagarin) are the only two Russian actors featured in the film.