Kenny Sinclair was a former NYPD cop who worked with John McClane before becoming the warden of the Mesa Grande Prison, located just outside of Las Vegas. However, Kenny was working with Reese Hoffman, Elena Goshkin and Klaus Von Haug to take control of Las Vegas. He was the main antagonist of Die Hard Trilogy 2: Viva Las Vegas.

At some point prior to the events of Die Hard Trilogy 2, Kenny served on the New York City Police Department, and was most likely in the same precinct as John McClane as the two were old friends. At some point he left and worked his way up to becoming the warden of the Mesa Grande Prison.

Kenny invited his old friend John McClane to a party in Vegas in honor of his new position. Hoffman and his secretary Goshkin also attended the party. One of the subjects of conversation between Hoffman, Goshkin and McClane was the prisoner Klaus Von Haug, a ruthless terrorist being held at the prison. However, during the celebrations, Von Haug escaped from his cell and released all other criminals from their cells.

McClane jumped into action, saving the endangered party goers and battling the escaped thugs. However, as his mission progressed, it became clear that Kenny as well as Hoffman and Goshkin were in on the jail break. He then resolved to hunt them down; saving Kenny for last...

McClane eventually confronted his former friend in Hoffman's office, which was located on the top floor of the Roaring 20's Casino, and engaged him in a shootout. Kenny found himself on the business end of McClane's gun in front of a shattered window. He raised his hands, appearing to surrender, but then made a move to grab a nearby gun, which was lying on his desk. McClane, however, proceeded to empty his gun into Kenny, causing him to stumble backwards and fall out of the window, and dying. His body landed on top of a car below. 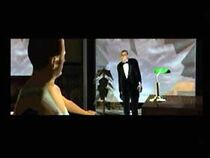 McClane cornered Kenny
Add a photo to this gallery
Retrieved from "https://diehard.fandom.com/wiki/Kenny_Sinclair?oldid=24492"
Community content is available under CC-BY-SA unless otherwise noted.