Leslie Barnes is a chief of communications and chief engineer of Dulles International Airport who assists John McClane when a renegade ex-US Special Forces unit take over the IAD tower's air traffic control systems. He is the deuteragonist of the second film.

With IAD chief of air operations, Trudeau, Barnes agrees to slow up air traffic due to the storm front coming in and work on the runways to keep them from icing up. When Washington National Airport shut down due to icy conditions, Dulles controller was forced to divert the planes to their airport. When John McClane comes in and shows them the identity of the man he killed in the luggage area was a mercenary name Oswald Cochrane and that someone will more likely takeover the airport, Barnes and the others witnessed runway lights have been shut down. The traffic controllers find that their systems are down and inoperable, realizing that all of their systems have been hacked. After the leader of the terrorists, Colonel Stuart calls in and tells Dulles that he wants the plane carrying General Ramon Esperanza to land on his destination without approach and have the 747 cargo conversion plane fully fueled and placed in an isolated hanger.

Barnes plans to restore airport's communications through the antenna array near the new terminal via annex skywalk. The airport's police captain Carmine Lorenzo sends his SWAT team to go with him as cover. As they went to the airport annex skywalk, Barnes speaks to Trudeau on the cellular phone while taking a skywalk. As he was speaking to SWAT leader about getting more equipment, O'Reilly shuts off the skywalk. When the SWAT commander confronts O'Reilly about him shutting off the skywalk, he kills the SWAT commander, springing the ambush. Barnes jumps over the skywalk and got down. He was hit in the arm by a falling glass as the entire SWAT team we're killed by gunmen, despite that they killed one of the men, Shockley. Barnes hid when O'Reilly stealthily found him and was about to kill him. But McClane, who was previously kicked out of the tower, kicks the vent cover open and kills O'Reilly, saving Barnes. He hid as McClane killed Sheldon and Mulkey. After the gunfight is over, Barnes shuts off the annex skywalk and lifts the scaffolding off McClane. Then a bomb went off the antenna array, destroying it and rendering it useless.

While getting patched up from his cut arm by McClane, Barnes informs Trudeau that Lorenzo's SWAT team were killed and the antenna array has been destroyed. Then he and McClane heard the radio static and was coming from the encoded radio. Barnes informs McClane the radio must be activated through it's code penal and it will take too long to crack the code. Then Stuart calls Dulles tower and McClane takes Barnes' cellular phone as he speaks to Stuart. When they realized that he is going to crash the plane, Windsor 114. McClane complained to Barnes why would Windsor 114 would listen to him and Barnes informs him is their own frequency. Barnes hands McClane his coat and helps him get down the balcony to the ground. Despite McClane's effort to save the plane, the Windsor 114 plane didn't see him and he and Barnes watched helplessly as the plane crashed, killing over 230 people onboard. Trudeau tells Barnes to find a way to warn the planes circling over Dulles about the terrorist situation.

Barnes and the air traffic controllers work on finding the way to warn the 18 planes that are circling above them. When one of the air controller mentioned the outer marker, Barnes realized that the outer marker is a radio beaker that sends the beeping signal so the planes will know that they over them. Barnes and the control tower personnel switch rate from the tower over the one with the beaker, so they can warn the planes without the terrorists' knowledge. Barnes fills the planes in on the terrorist situation and that they cannot reply on their own frequency because they are impersonating Dulles tower to crash planes. Barnes was present when Esperanza arrived in the Dulles airport and was ordered by Stuart to not to land any planes.

After McClane's failed attempt to get Esperanza and grilled by Lorenzo and Special Forces commander Major Grant, Barnes goes to McClane and thinks he knows where Stuart's place of operation might be at. He tells him about the underground instrument landing system which passes an nearby neighborhood and might've been cut to drain the ILS system. McClane and Barnes conduct their own investigation in the neighborhood and Barnes suspects the terrorists are at an old church called Hidey Lake Community Church where the underground ILS lines run at. They spotted Baker, who was patrolling the church and realized that the church is where the terrorists are at. While McClane deals with Baker, Barnes calls Lorenzo and informs him at the terrorists are at the church. When the Special Forces and airport police arrive, Barnes and McClane wait alongside as the firefight starts. Once the firefight is over, Barnes goes inside and recognizes that the equipment inside can land the planes. Unfortunately, they were booby-trapped with C4. Barnes returns to the IAD control tower afterwards. After seeing McClane destroying the 747 plane carrying the terrorists, he was surprised that the plane that McClane's wife, Holly, was on followed the fire line to land and everyone else was thrilled that the all the surviving planes in Dulles airspace did the same thing. Barnes and Trudeau shook hands in relief the nightmarish situation is finally over. 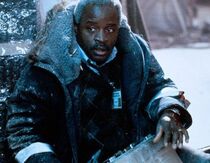 Barnes during the SWAT shootout.

O'Reilly about to kill Leslie Barnes.

McClane meets Barnes after killing the skywalk mercenaries.
Add a photo to this gallery
Retrieved from "https://diehard.fandom.com/wiki/Leslie_Barnes?oldid=24601"
Community content is available under CC-BY-SA unless otherwise noted.