Die Hard Wiki
Register
Don't have an account?
Sign In
Advertisement
in: Characters, A Good Day to Die Hard characters, Antagonists,
and 6 more

Mako was the loyal henchman of Komarov.

A Good Day to Die Hard[]

For most of the film, he seemed to be loyal to Alik. Mako was patrolling the areas in Chernobyl. Mako was later revealed to actually be working for Komarov. After Komarov was captured by John and Jack McClane, Mako engaged in a gunfight with them. Mako was killed when John attached a grenade to a forklift and sent it at Mako. The grenade detonation triggered a massive explosion due to gas released from pipes in the gunfight, killing Mako. He was the twelfth kill made by John McClane against Komarov's gang and the only named henchman to lose his life to McClane.

Mako with Irina in a helicopter 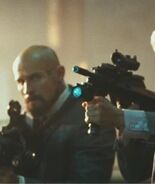 Mako at the hotel dance floor
Community content is available under CC-BY-SA unless otherwise noted.
Advertisement