Nakatomi Plaza is a high-rise office building in Century City, Los Angeles, California that houses the headquarters of the California branch of the Nakatomi Corporation, a Japanese company. The building used to represent it is played by the Fox Plaza building, the main headquarters of 20th Century Fox.

It is a post modernly-designed, 35-story high skyscraper that is a total of 490 feet high. The building was nearing completion in 1987. Like many skyscrapers, it features stairwells, elevator shafts, pipe shafts, offices, and a roof, all of which John McClane utilizes to his advantage to defeat all 13 terrorists that take it over.

On Christmas Eve, 1988, a group of terrorists led by Hans Gruber took the Nakatomi employees hostage during their Christmas party. Although the group of terrorists appeared to be motivated by freeing political prisoners, they were actually after $640 million in negotiable bearer bonds and other valuables stored in the Nakatomi Corporation's vault and were planning on killing the hostages in an explosion so they could escape unnoticed.

John McClane, an off-duty NYPD officer that came to LA to spend Christmas with his estranged wife and children, managed to slip away from the terrorists and hide in the top five floors of the building, where he slipped around in the shadows, used his surroundings to his advantage and started a one-man war with the terrorists, destroying much of the building in the process, with no help from the LAPD (except Al Powell), who do not want to gamble with the lives of the hostages.

The skyscraper was nearing completion at the time, but was finished and is now Fox Plaza. 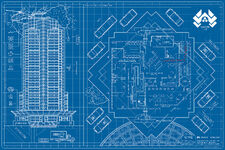 The blueprints of Nakatomi Plaza.

A scale model of the Nakatomi Plaza in the boardroom, which is pointed out by Hans Gruber. 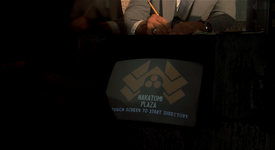 The Nakatomi Plaza logo, seen on the welcome directory in the lobby and on Holly's paperwork.

The Pacific Courier truck pulling into the parking garage.

The Plaza as seen from the roof. 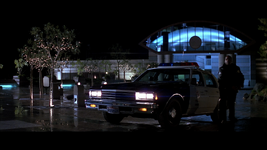 Sgt. Al Powell's Police Car in front of the Plaza. 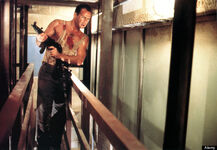 McClane armed with the H&K MP5 on the walkway. 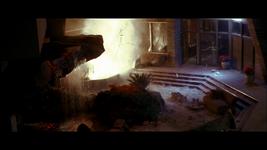 The 30th floor in ruins. 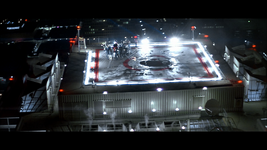 The roof of the plaza. 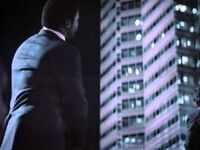 Agent Johnson looks up at the skyscraper. 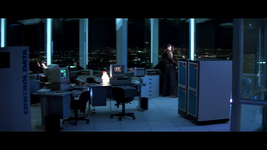 A view of the 33rd floor showing the height of the building. 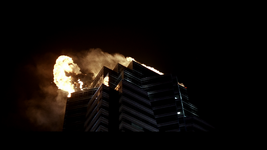 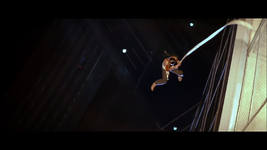 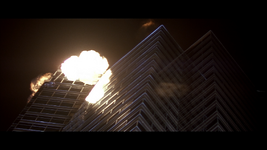 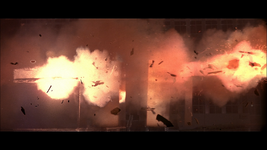 The third floor is destroyed. 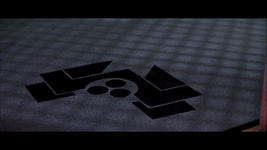 Nakatomi logo on the floor. 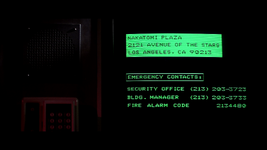 John McClane is caught by Karl on the 35th floor. 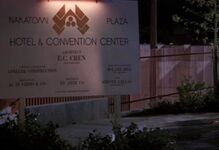