"The fire has been called off, my friend. No one is coming to help you. You might as well come out and join the others. I promise I won't hurt you."
―Tony looking for John McClane [src]

Tony Vreski was one of the German terrorists employed by Hans Gruber to disable the phone lines at Nakatomi Plaza. The first terrorist that tried to kill John McClane, he was Karl's younger brother, named after the main antagonist, Anton "Little Tony the Red" of Roderick Thorp's novel Nothing Lasts Forever, which was later made into Die Hard, meaning that Tony's full name is likely Anton. He is presumably the youngest member of the group.

Tony arrived at the Nakatomi building in the Pacific Courier truck and went down to the phone junction box, which was located in the basement. He was manually disabling the phone lines until his brother Karl came and started up a chainsaw to cut the phone lines, despite Tony's protests that he was not done yet. He barely manages to patch up the last phone line before they are cut by Karl. Tony glared at his brother as Karl merely walked away. He is a minor antagonist in Die Hard.

Tony and Karl joined their comrades in the 30th floor when they took control of it. He guards Nakatomi's head executive Joe Takagi on the 34th floor as Hans asked for the code to the vault that contains $640 million in negoiatable bearer bonds. After Hans killed Takagi for refusing to give him a code, he orders Tony to dispose of the body, but were sidetracked by a strange noise outside. Tony and Karl went to investigate, but found no one.

Later, when a fire alarm sounds off on the unfinished 32nd floor, Hans sends Tony to check it out. Tony looks around the floor and tries to get the intruder to come out and join the others. Although Tony promises not to hurt him, he fires his MP5 around the room to see where he was. However, he did not find him and John McClane used a power saw to distract him, after which he pulled his Beretta 92 and held it to Tony's neck. Tony asserted that McClane won't hurt him because he is a cop and he has rules to follow. However, John and him get into a fight and John pushes him into the stairwell where they fall down the stairs. McClane breaks his neck by pushing his head into the metal steps as they tumbled down, using Tony's body to cushion the fall. Later, John puts a Santa hat from a mannequin onto his corpse, which he sets on a chair and uses a red permenant marker to write the words: "Now I have a machine gun. Ho Ho Ho". He is then discovered by his comrade Fritz, who alerts Hans about his death. This enrages Karl, who had been called by Hans to be informed, and he vows to kill John to avenge his brother and telling his teammates that no one kills him but himself.

Tony heading for the phone lines in the basement.

Tony is confronted by John McClane. 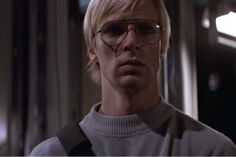 Tony is slightly nervous when he can't find McClane